Because someone asked about the somewhat bizarre looking plant in a photo from my last post, I decided to add a little more on the field horsetail (Equisetum arvense), the only living genus in the class. It is strange looking because it is an actual living fossil. Like ferns and club mosses, the plant dominated the Earth at the end of the Devonian period where it grew gigantic, up to 100 feet tall. Horsetails were there millions of years before the dinosaurs roamed the Earth and eventually became our thick beds of coal.

The fertile stems that look a little like tan asparagus appear in early spring. Lacking chlorophyll, these spears launch dust-like spores from the cones at the tip, then wither and die back.

The cones of the spore laden stalks are called stroboli. Spores are launched from here into the wind to establish new sites.

The fertile cycle is swift, then followed by…..

…..sterile green stems with whorls of feathery modified leaves at the nodes. These stalks are hollow with ridges at nodes along the stems. 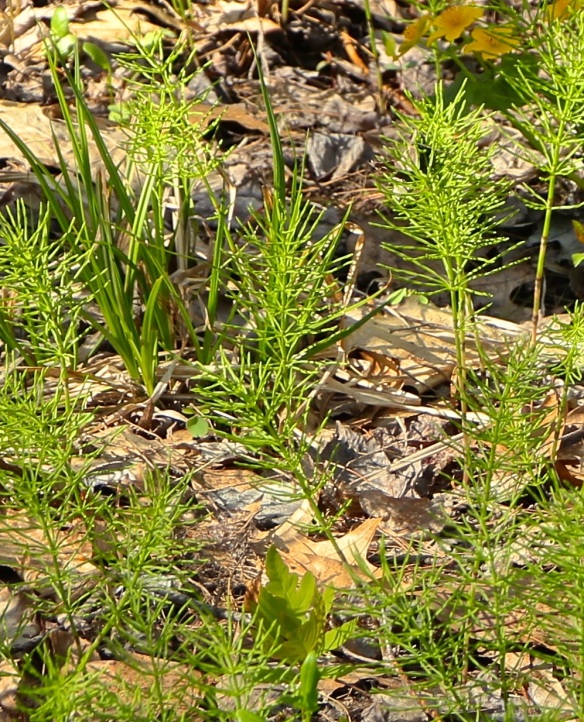 Rub the plant between your fingers you will feel the tough, grainy texture of the silica contained in the tissues. Many campers are familiar with this plant for it has been long used on trails as eco-friendly abrasive pot scrubbers.

Although the perennial is common in North America, I have never seen such an invasion as I have here. Large sections lining pathways, ditches, and roads look like breeding grounds for miniature pine trees. The plant’s rhizome system is extensive both horizontally and vertically up to 5′ or more deep in the soil. If the ground is disturbed, new plants can appear from half inch sections left in the ground. Although a native plant with medicinal benefits, it is classified as invasive. It causes problems in orchards and landscapes, small fruit crops and nurseries, plus fields and pastures where it is toxic to some livestock, causing a condition called equisetosis.

But, on my walks I can’t help but stop and admire one of the oldest plants on the planet that has survived the ages simply because it is almost impossible to eradicate. It is here to stay….