When you chance upon a roadside or field covered with this vine, eerie silhouettes of Godzillas or mighty lizards rising from the jungle floor come to mind. Silently and steadily, these creatures, concealed beneath trailing vines, mature to a hundred feet tall and infiltrate new ground every growing season. 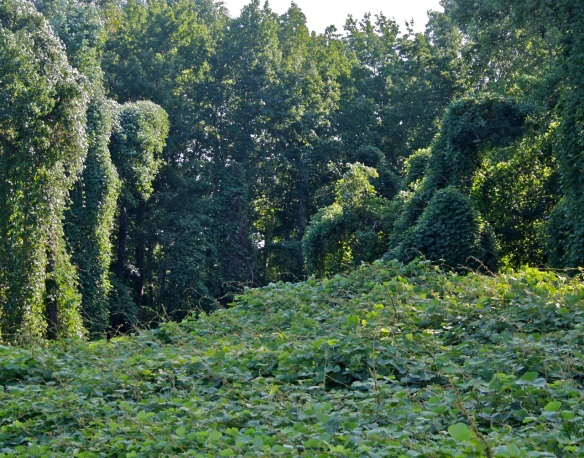 In its native China and Japan, it garners a lot more respect than we give it. Called kuzu there, it is eaten and used in medications. But in America, kudzu (Pueraria montana) or “the weed that ate the South,” is an extremely fast growing invasive vine, adding up to a foot of growth each day of the summer and perhaps 60 feet a season. It’s said to blanket over 7 million acres of land in the US, hiding telephone poles, smothering and killing trees and endangering forests and native habitats.

Japan brought the plant to America for the Philadelphia Centennial Exposition, our country’s 100th birthday celebration in 1876, to display as an ornamental plant and a food source. Apparently the plant caught the fancy of Americans. Nurseries sold it. Farmers planted it. The CCC used it for soil erosion in the 1930’s. That was then. Today this dangerous invasive is spreading at the speed of around 120,000 acres a year.

Eradication of the invasive has been difficult. Repeated herbicide treatments for up to ten years can have an effect. There are state and federal eradication programs but are they working? Meanwhile the vine is moving northward. It has invaded 16 counties of Ohio, once thought to be too cold for winter kudzu survival. It’s not really armies of giant lizards but it’s still a scary nightmare. As they say down south, close your windows at night or you may be sleeping with kudzu by morning!