Lured by insects flying around the light outside my office at night, my once evening-only visitor now lives on the window 24 hours a day. It’s been a wet fall and this bright green amphibian, the American Green Tree Frog (Hyla cinerea), need not seek moist crevices during the drying sunlight because we’ve not seen the sun of late. Monsoon-like rains, local flooding, and storms seem to be the daily forecast for us in Tidewater. 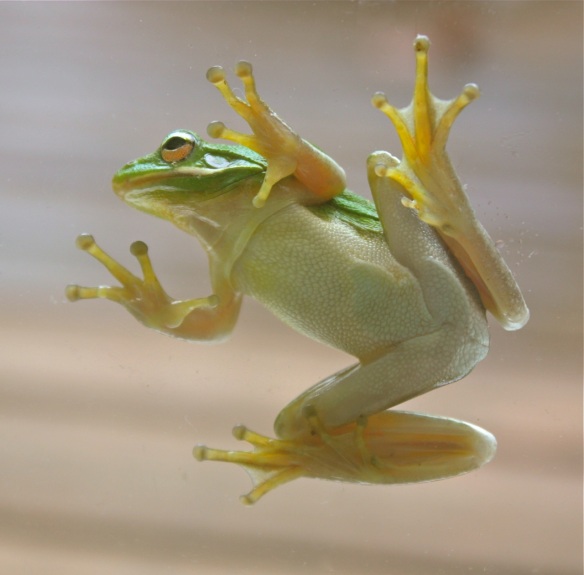 Click for closeup of the American Green Tree Frog

It’s been a banner year for these frogs in the garden as well.  Green tree frogs of all sizes rest contentedly during the day on dew laden leaves and vegetation while I carefully work around them. These frogs are one of the most common amphibians of the southeast and most of us are familiar with them, if not visually, we surely know them by their nightly calls during mating season. For such a tiny fellow, 1.25 to 2.25 inches, their loud ‘queenk or quonk’ can feel deafening on a humid Tidewater evening. Their diet consists of insects… crickets, flies, worms, beetles, mosquitoes, and those fat juicy moths that flutter around the outdoor lamp at night.

I have enjoyed the antics of the visitor to my office window. He’s quite accustomed to my presence.  And while slowly climbing toward hapless moths around the evening light, he is tolerant of me following inches behind with a rather large camera.

I would say we were evenly matched when we began battle over the pond habitat. (See “Where Have All My Frogs Gone? ) He had no fear of me and I had no fear of him. I only wanted to relocated him to a nearby snake Shangri-La but he knows very well that this little pond is nirvana, not for the fish and frogs, mind you, but for this chubby snake that grows wiser by the day.

I allowed the pond to evaporate about a foot.  This exposed the fieldstones arranged at water’s edge, his favorite hideaway. He could not slither in and out of the water without being discovered. I was sure I could hide the minnow net beneath the surface of the water and swoop him up when he picked his favorite escape into the depths of the pond.   Nix the minnow net. He seemed to ignore it when it arrived on scene but after several failed attempts to steer him into a watery trap, he quickly learned to turn tail and hide beneath the cotoneaster if I brought out the net.

At one point, I did not see him for several days. “Yes,” I thought. “I rolled up the welcome mat and he’s taken the hint.”  But no, he is still here and watching me now from the shadowy vegetation.  And I can only watch him from the window where I took the photo above with a telephoto lens.  He’s wise to me. If I crack a door slowly, he’s gone.

I still sit by the near empty pond to enjoy the fish and insects.  Occasionally, across the pond, the cotoneaster branches convulse as if a wild boar is careening beneath.  I know who it is and I think he’s probably caught a hapless creature in that charge.

My next move should be to trim overhanging branches, sedges, and begin to remove the fieldstone, then I should remove his food supply,  the few fish, but at this point I’m beginning to have nightmares that he may grab my foot and swallow me. Can a snake grow more intelligent?  I know he’s outsmarted me.

The answer, my friend, suns himself on the edge of the pond.  It’s no longer a fish and frog pond. It is a snake pond.  This is a Northern Water Snake (Nerodia sipedon).  He’s big, he’s not afraid of me and he’s eaten every single frog in the pond.

Our army of frogs began to dwindle about 3 weeks ago. I suspected something sinister, maybe a raccoon or a great blue heron.  I continued to putter around the pond, wading knee deep into the crocosmia and cotoneaster to pull a errant honeysuckle vine or walnut tree sprout.  On my last venture into the thicket, I stepped close to the pond and something big shot from beneath my foot and disappeared quickly, branches moving along its route. “Ah-ha,” I thought. “We have one big bullfrog left.”

It was a couple of days later when the Northern Water Snake first showed himself, fat and content, slithering in and out of the water and dashing to hide beneath the cotoneaster. It was he in the thicket, not a bullfrog that I disturbed. All of my frogs he wore on his waistline. He has eaten every last one.

A quick count of my fish tells me they are his latest victims. This week the snake no longer attempts to hide himself. Each day I stand at the pond staring at him as he curls up on the warm rocks basking and regarding me, tongue flitting, sensing his environment. His look tells me that this is his pond now.  But he does not know me at all.  I am already planning my strategy.

This is not a snake I’d want to share the water with.  Often mistaken for a cottonmouth, the Northern Water Snake is not venomous but, like all water snakes, it can be cranky. It may charge and it does bite. It dines on amphibians and fish day and night, routinely eating fish as they sleep at night. Grrrrr!

The snake is beneficial to the environment but not to my pond. I will not harm him but my game plans involve a minnow trap and/or a butterfly net. I know a beautiful lagoon about 6 miles from here that awaits this fella’s arrival.  I hope I trap him soon or all I’ll have left is mosquito larvae living in the water!

With weather in the upper 70’s on Sunday, it was time to clean the pond. The bullfrogs chose the day for me.  Their mass emergence from the pond on Sunday allowed me to disturb the bottom without injuring a hibernating frog. The bullfrogs appeared within minutes of one another as if there was an underwater alarm clock. As they dragged their inky bodies from the pond, they were practically unrecognizable as bullfrogs. Lethargic and muck-colored, they settled down on the sun-warmed rocks.

This was truly my window of opportunity. Soon these boys will begin their irresistible chorus of

Click to see pond life complete with Jack, the cat

You could call me a lazy water gardener since I don’t remove the fish, I don’t drain the pond and I don’t remove all the muck in the bottom of the pond. I leave the gravel that has fallen from potted plants to provide a habitat for good bacteria that breaks down ammonia wastes.  I clean the bio-filter that provides a bubbly fountain that aerates the water.

Since the pond is not in full sun, string-algae is not a real problem.  Algae might appear before the ginkgo leafs out, but not to worry. It’s the tadpoles’ fav food and it soon disappears.  My methods are not for everyone but they have worked for me for many years.  The lilies, the iris, the grasses, the insects and the animals thrive.

This is our simplified little pond where the healthy fish and frogs eat the insects and plants, and an occasional great blue heron, snake or raccoon will eat the frogs and fish. It is our water garden full of life meant to be studied, appreciated and enjoyed.  Add two chairs and two glasses of wine and it’s a perfect setting at the end of the day.

Today I was drawn to the pond by a symphony of music. I stood there for minutes searching for members of the orchestra but not one was visible. Yet I’m sure I was being watched by hundreds of tiny eyes, the eyes of spring peepers (Pseudarcris cruicer), the first species to begin calling each spring. Hidden well in the vegetation and silenced by my approach, the music began again after I took a quiet stance.

For weeks, all in Virginia have heard the shrill whistles from distant woods and ditches but the sound in our frog pond has reached a fever pitch. This all-male chorus of tiny frogs has an amazingly loud and high ‘peeping,’ all directed toward the fairer sex. The higher and faster a male can sound, the better his chances are of attracting a female of the species.

Peepers are good climbers but they prefer to be on the edge of ponds and marshy woodlands full of grasses, twigs, and shrubs.  From just above the water, trios of males form a chorus to compete for mating rights. These little frogs vary in size but on average they are just over an inch long and  are found in shades from brown, tan, olive, gray or a tinge of red. The belly is cream and the back is marked by the most distinguishing feature, a dark cross.

Most folks have a great affection for the spring peeper for they mark the awakening of spring and the renewal of life.  Winter is finally over.  Hallelujah! 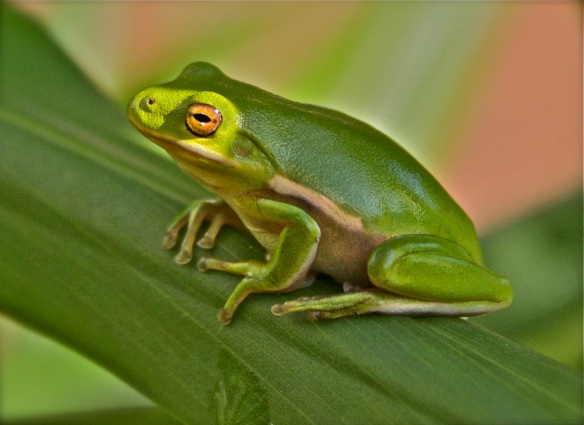