I was wrong about summer coming early. The sizzling hot temps lasted about two days. It did fry our early red tulips in the birdbath garden but our mid-season white tulips emerged and were greeted by seasonal New England temperatures…. warm days and cool nights.

After a day of glorious rain yesterday, we woke today to our customary cool spring today.  White tulips against a groundcover of “Tide Hill” box brightens up this border before any sunlight appears over the woodland surrounding us. “Tide Hill” is a wonderfully compact littleleaf boxwood that is tolerant of our icy, cold winters and does fine during hot, humid spells during the summers. It only grows about a foot in height but will spread about 4 feet in diameter. It’s a perfect groundcover for our garden entry highlighted by a few florals…. and eventually “Karley Rose” fountain grass in a container. Both the box and fountain grass were purchased at Rolling Green Nursery in New Hampshire.

New to the border this spring is “Starlight Sensation,” a new hybrid daffodil (below) from Brent and Becky’s Bulbs in Gloucester VA.  It won the “Best Daffodil” at the 2017 Philadelphia Flower Show so I was on the phone to order that day. This is its first season but eventually we should have multiple nodding blooms per stems.  The buds are a shade of yellow and open to a creamy white.

Three shades of muscari will eventually spread and fill certain borders… this one with a backdrop of “Becky” daisies. I worried because the muscari green leaves were perfect fodder for our bunny. They were eaten to the ground several times but we have regrowth and blooms. Bunny has moved on to clover. 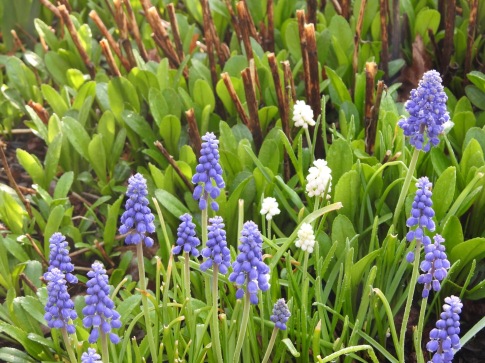 That’s it for the bulbs but herbs are looking good, serviceberry trees are glorious and crabapple tree is ready to burst on the scene with pink blossoms. More to come…..

23 thoughts on “Yes, Spring did arrive…”