I’ve been a compulsive caretaker, one who rescued or adopted kittens, taken in stray dogs, fed the neighborhood kids at lunchtime along with mine. Kids are grown and gone, but I still rescue animals…. and now I think I’ve rescued a weed.

Three weeks ago a small sprout became visible in the soil of my summer geraniums (Pelargonium) that are wintering indoors. I was curious so I let it grow. It lost its plump cotyledons and began to shoot upright through the geraniums looking for sunlight. What a funny looking little plant, I thought. Is it a weed or a maybe a sprout from last summer’s autumn clematis?

I thought the tiny fuzzy head might be a bloom but no, it just produces more leaves as it grows.

It’s healthy so I figure it’s a weed since weeds are the healthiest plants in my garden. Sigh…

The stem is woody and and hairy. The pubescent leaves have been opposite but the last three were whorled. I wonder what the next ones will be.

The tip is as tiny as a pencil eraser and full of miniature leaves. No bloom in sight.  I’m at a loss to identify what I’ve adopted but I think it’s cute.  As long as I don’t develop a rash from it or it doesn’t turn into Audrey from Little Shop of Horrors, I’ll nurture “Harry” till there is an possible ID.  If there’s a guess out there, let me know….

April update:  the tiny stowaway in the geranium bed finally bloomed. I’m certain my friend who suggested it may be a sprout from last year’s birdseed is correct. Beautiful tiny yellow bloom. 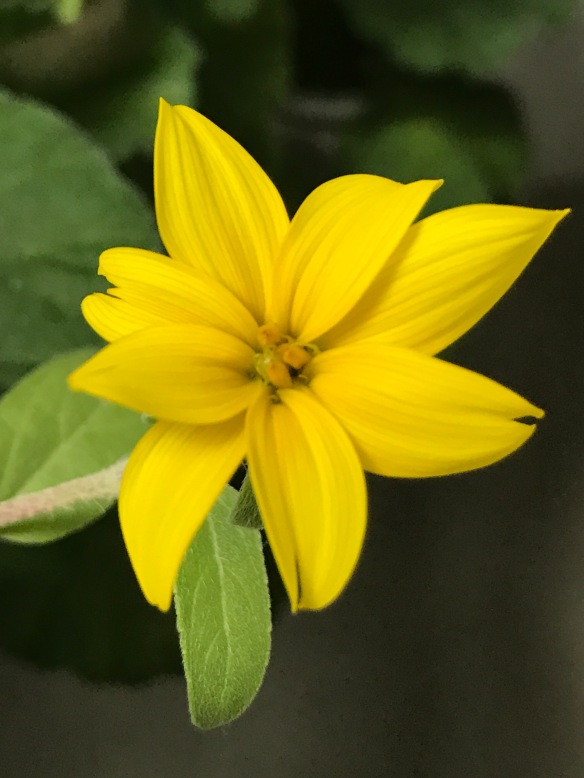 6 thoughts on “Mystery plant amid the geraniums”