Today the temperature reached 37° and our icicles took on a life of their own. Drip. Drip. Drip. For the next 10 days or so, the temperatures will fluctuate. We may have negative temperatures at night and daytime will be in the teens, the twenties and a couple of thirty degrees here and there. We will have thawing and freezing of the very heavy snow atop everyone’s roofs…. which causes the dreaded ice dams that become leaks in a home. Ice dams are already creating havoc in many homes in New England and we are crossing our fingers that we won’t have a problem this year.

Roof raking is a big business around these parts. We’ve had our home cleared of ice and snow twice. And we will have it done one more time this week. That should be it for the winter (knock on wood) for us but many others are waiting to have theirs done for the first time and just hoping for no more snowstorms. The weight of snow and ice has caused several major roof collapses in the area and created structural damage to schools, homes and businesses. 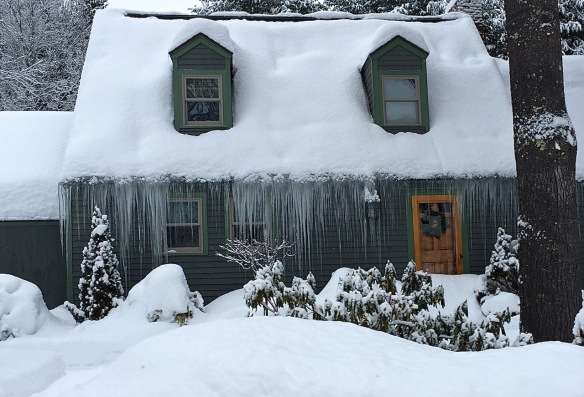 It is not an easy job, nor a safe job to clear roofs of snow and ice. Roofs are generally steep in this part of the world. Workers climb tall ladders and cross roofs in frigid temperatures carrying very long snow rakes. We’ve watched numerous homes being done, including our own. It’s a job I would not want!

The removal of ice dams is not for the faint of heart. Swinging a sledge hammer overhead like this, you would think it would go through the roof, but I was amazed at how exact these workers were at hitting only ice. They completed the task without causing structural damage to the home. 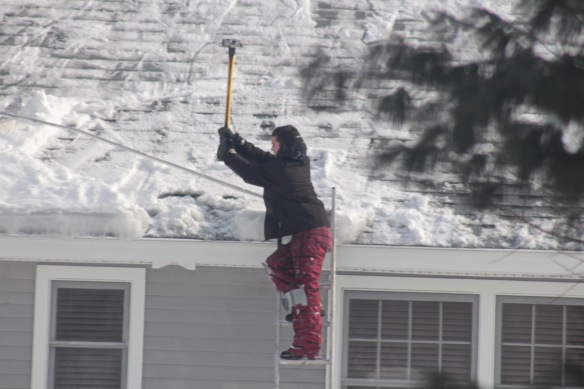 Even though the ground is beneath about 4′ of snow, I can feel spring. It’s definitely in the air.  I am dreaming about those warmer days ahead and making lots of plans for our garden. Spring officially begins on March 20…. just weeks away (actually 25 days, 34 minutes, and 30 seconds!). Will the snow have melted by then? I rather doubt it…