Do you recognize him? You’ve certainly seen him before. He was a well-known television personality for 15 years, the author of 5 books, a former science editor of Horticulture Magazine, a lecturer, and the author of numerous magazine articles. He earned his graduate degree and PhD. from Harvard in Biology.

If you haven’t guessed by now, it may be because he is out of uniform. You need to see a little red. 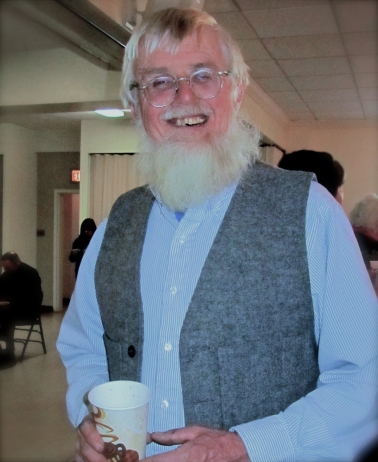 You should recognize him without the gray vest. He’s the beloved “man in the red suspenders,” aka Roger Swain, who hosted the popular PBS show, The Victory Garden until 2001. We are fortunate to claim him as a fellow New Hampshire

resident and mister gardener and I were lucky to hear him speak at a combined meeting of local garden clubs.

He spoke to the crowd in his usual chatty style, full of enthusiasm, wit and humor while passing on knowledge about what he loves and believes in: vegetable gardening.

“Gardening is the single greatest skill that humans have ever come up with because we harness photosynthesis for human sustenance. Every population on the planet is absolutely dependent on the skills of gardeners.” And he added, “A garden without something to eat in it isn’t really a garden.”

He was the third host of PBS’s Victory Garden. He told us the original war gardens began in WWI with a “Can the Kaiser” campaign to encourage vegetable gardening. The term Victory Garden grew from that. Victory Gardens returned in WWII. “Grow More in 44!” was the phrase on this WWII poster. In 1944, 44% of fresh food was grown by 20 million amateur gardeners. So much was grown that there was a food shortage after the war when gardens were turned back into lawns.

Why does he want us to garden? We need to understand that the vegetables we buy in stores today are commodified or bred for color, longevity, and shipping but not taste. The best tasting vegetables are those picked at peak of ripeness from your own garden. When asked what is the best tomato, he said, “The best tasting tomato is a ripe tomato. The one I like best is the one I just ate that was ripe.”  Today, we have other choices.  Farmers’ markets are all the rage, especially in New England. There are currently 8,100 farmers markets selling local vegetables in this country. To champion agriculture, his philosophy is to spend $10 every week at his local farmers’ market.

But his message to us was to grow it yourself whether in community gardens or at a neighbor’s or in pots or in your own garden at home. Then be a role model. Pass along the interest and skills to the next generation. A child who learns to love gardening will garden for a lifetime.