In the spring, one of the first plants I searched for in local nurseries was Liriope muscari,  a common perennial border plant in Virginia. I was happy to read that with a little care, it can be hardy in our zone 5. So I was surprised that it was not readily available locally and I saw puzzled looks on faces when I asked for it. The word liriope easily rolls off a southerner’s tongue as it is found practically in every garden… usually as a wonderful pass-along plant.

I was absolutely thrilled to finally find some at Rolling Green Nursery. A enlightened worker marched me right to their one flat in a far corner of the property. I bought it all. I knew how easily it divided. Each pot became two. But I wanted more and vocalized my disappointment to my brother and his wife. Imagine my surprise when a heavy box arrived soon after. I was delighted to find carefully packed pass-along Liriope muscari from their garden. The best part of this story is that the plants were passed along to them from a beloved aunt’s garden in Jacksonville FL. Better yet, she obtained her plants from my dear grandparents’ gardens in Richmond VA many years before. So I am the 4th person to benefit from these special pass-along plants! As soon as they are more established, my daughter in Portsmouth will be the 5th recipient.

There are two species of of the plant and I’ve cultivated both in the past: Liriope muscari, a plant that behaves as a mound of grass-like foliage and Liriope spicata, a variety that spreads as a wonderful groundcover.

When so many garden flowers are beginning to fade in July and August, Liriope is just beginning its show. The flowers are tiny however they are numerous along a spike. The hum of bees working the blooms is music to my ears. 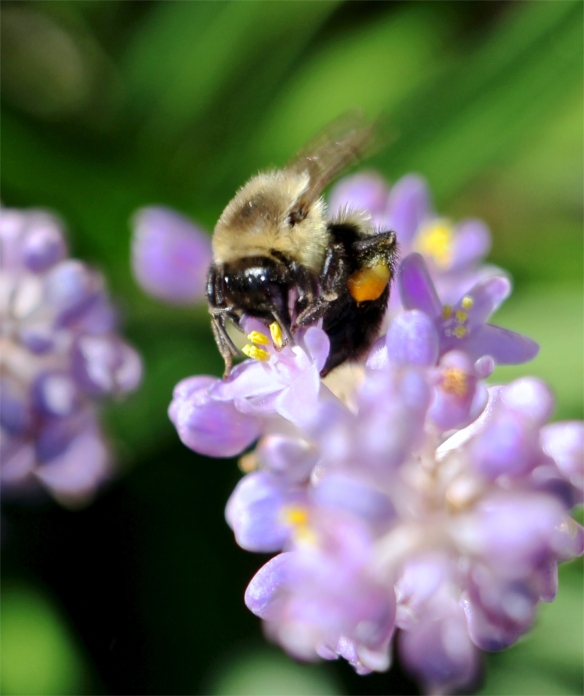 It’s a terrific plant, tolerant of summer heat and lack of water. There are many species and cultivars with variegated leaves of green and white or yellow and white or pink blooms,and different sizes, however the solid green leaves feel cool and inviting to me.

This week, the mower with our landscaping service stopped his tractor and asked, ‘Can you tell me what those plants are that are blooming along your border?’ Of course I could… and if he plays his cards right he may be another pass-along donee.