I’ve been on the road recently… first to Washington DC with two sisters and some of their family to experience the exhibit Written in Bone: Forensic Files of the 17th-Century Chesapeake at the Smithsonian’s National Museum of Natural History.

The Smithsonian’s forensic anthropologists Doug Owsley and Kari Bruwelheide, developed the Written in Bone exhibit after an extensive study of 17th-century bone biographies in the Chesapeake area, including those of colonists barely surviving at Jamestown VA, and those living in the wealthy settlement of St. Mary’s City MD. Newly added to the exhibit is Jane, the forensic facial reconstruction of a young girl who did not survive the ‘starving time’ at Jamestown with the forensic evidence confirming the ‘harsh reality’ that she was consumed by colonists after death. 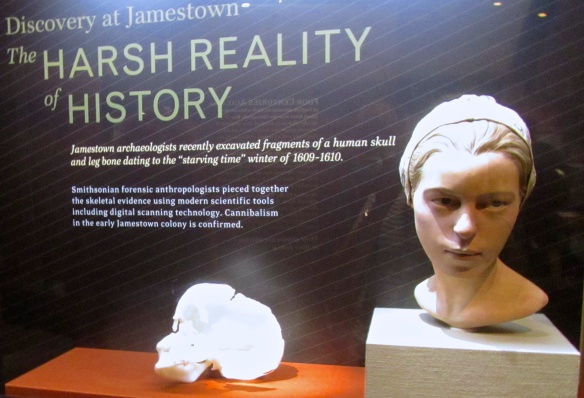 And, ahem, please permit me to brag just a little. Little sis, curator at Historic Jamestowne, Jamestown Rediscovery, was asked by Doug Owsley to take an active part as an advisor for the study and the exhibit. For years a huge chunk of her time was spent on the project with meetings and trips from Williamsburg to DC. The exhibit opened in February, 2009 and millions have been able to learn much about the earliest inhabitants through bones: men and women, white, black and Native American. All of my siblings have been guided through the exhibit with sis…except for one sister and me. What a treat it was for the two of us with other family members to finally experience a journey through time with one so scholarly as my sis.

If you plan to be in the DC area, take the time to experience the exhibit for it is slated to close in January 2014.

We chose one of the busiest weekends of the year… the July 4th weekend. The city was hot and steamy. Water was being sold by enterprising individuals on almost every corner. Throngs of visitors bought water as they crowded sidewalks, buses, subways, museums, restaurants. I was amazed by the number of families with small children… surprisingly well-behaved and interested in what they were seeing. Rarely did I experience a meltdown by a little one… although I was close to having one a few times.

Visits to other sites such as Smithsonian’s National Museum of the American Indian, the Smithsonian Folklife Festival 2013, One World, Many Voices, and Old Town Alexandria topped the touring events of our long, hot weekend.

National Museum of the American Indian

One World, Many Voices

4 thoughts on “Boning up on History!”