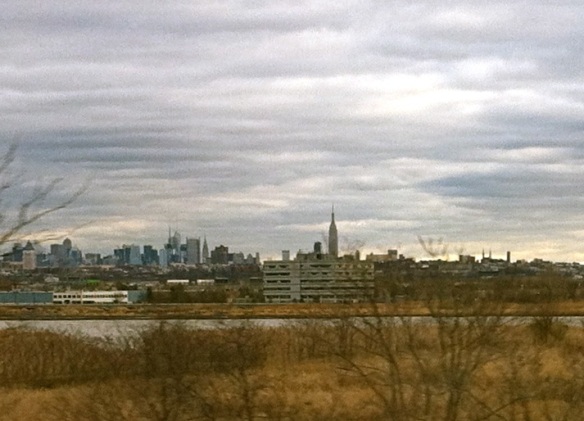 … but I’d never seen one. As I whizzed past New York City on the New Jersey Turnpike last week, I spied an unusual pine tree that towered over surrounding trees. I snatched my phone and snapped a couple of photographs so I could later identify this oddity When I was passing it, I noticed some peculiar objects tucked in the boughs. That’s when I realized I was seeing a cell tower disguised as a pine tree.

Most concealed cell towers are on flagpoles, church steeples, grain silos, but increasingly there are cell towers disguised as monopines, monopalms, monocacti, or monocypress. To satiate our need for coverage for cell phones, texts or emails, wireless companies are fast increasing the numbers of these controversial towers. Making them blend naturally into the rural landscape must be their goal. Well, they missed the mark here.

Some look natural but the one I saw must attract a great deal of attention. It was downright ugly. Like everyone, I’m happier with good phone service but these monotrees just seem so wrong… sort of like sticking plastic flowers in your garden.  If we want to end on a positive note, these trees will never need maintenance. They’ll never succumb to disease or drought and they’ll never need pruning or any fertilizing. And, lastly, they will keep folks happy by preventing more dropped cell phone calls.