One of my required master gardener classes was a lecture on garden tools. Instructors were scheduled to instruct the class on the tools available for gardeners and the purpose of each. They were bringing examples of spades, shovels, trowels, rakes, saws, shears, weeders, pruners, loppers, hoes, garden forks and pitchforks. Whew! In the world of gardening there are as many tools as there are jobs and we were going to learn all about working in the soil with some and working with plants with others. I felt a little smug going in to this class. I was already a gardener and I had my basic arsenal of garden tools. I knew I’d be yawning, drawing doodles in my book, and looking at my watch a lot during class time.

No rust on these tools!

Boy, was I wrong! I began the class elbows on the desk and head in my hands. Several hours later, I was sitting up straight and had taken copious notes with small sketches in the margins. I found I did not know all the names of the tools I already owned. And I learned a few new names of other handy garden tools. A Winged Weeder? A Garden Bandit?  A Swoe?  A dibber? I learned when to use bypass pruners and when to use anvil pruners. I discovered I knew nothing about choosing a tool to fit my grip, did not understand the benefits of short-handled tools and long-handled tools, styles, weights, and materials. I learned, like proper shoes, garden tools need to be fitted to the gardener. 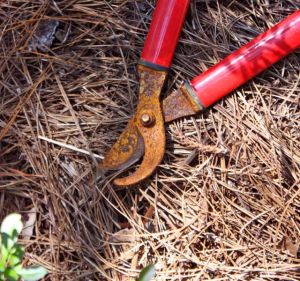 And I learned valuable knowledge on sharpening my own tools (I tossed the dull and bought new ones) and the proper care of tools (I tossed the old and bought new ones).  I took my tools for granted and left them where I last worked in the garden. I’m much better now about wiping tools clean of any dirt or grass before storing them in the garden shed. I sharpen tools regularly and coat the metals with a mixture of petroleum jelly and light oil or a rust blocker spray like Bull Frog Rust Blocker (environmentally safe) to prevent rust. Another master gardener tip for treating metals is to fill a pail with sand and mix in used oil. Any oil will do… cooking, motor… but I do wonder about the environmental impact of eventual disposal.

I still have my favorite tools in the garden shed and it’s nice to know their names, to know how to use them, to know they are better cared for and that they might last a lifetime.