I received the following email today from a friend:

Yesterday, I saw a large black and white beetle with bull’s-eye eyes. It clicked and fell over dead. What are they called?  It was black spotted with white. I thought it was dead and kicked it off the deck. Are they friend or foe?

Well, Felicity, I’m fairly certain you saw a click beetle. There are hundreds of different species in North America. All of the species have a common behavior which gives them their name. When on their backs or when threatened by a predator, they all snap their heads with an audible “click” with such force that they are launched into the air, either landing upright, at a distance from trouble or they fly away during the launch.

The click beetles that I commonly see are smaller, solid black or grey, nocturnal and attracted to light. When I turn on an outdoor light, among the moths and a variety of beetles is the click beetle, flying around the light or resting  on the wall in the glow of the bulb. The click beetle is one I cannot resist picking up between my thumb and index finger with its head exposed. It bends its head back, hesitates a split second, then forcefully snaps it forward. With each snap, it inches slowly from my grip finally catapulting into the darkness of the night. What a neat insect! 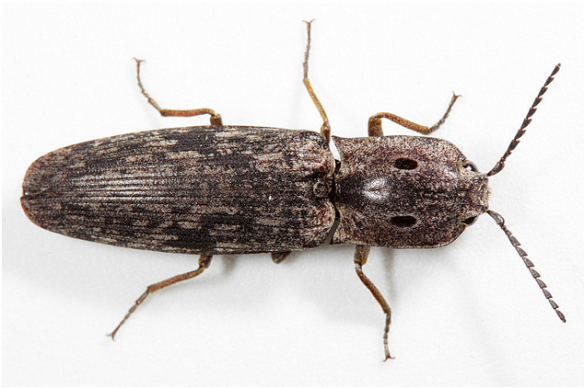 The click beetle that Felicity saw sounds like either the Eyed Elater or Eyed Click Beetle, one that can grow to 2″ long or she saw the Blind Click Beetle, a smaller insect with smaller eyes.  The eyes of both are false. They have evolved to frighten off predators. The real eyes are small and are located closer to the insect’s antenna.

The larvae of the Eyed Click Beetle, Alanus oculatus and Blind Click Beetle, Alaus myops, live in damp decaying matter such as rotting logs or under a blanket of decaying leaves. They can spend years in this stage as predators of insect larvae, including noxious insect larvae like wood-borers. In the adult form, they feed sparingly on nectar and juices from plants. In our part of the country we see more of the Alanus myops, the smaller Blind Click Beetle.

So Felicity…. this is a friend, not a foe. It does not bite. It does not sting. You can pick it up without harm. You can watch it entertain you with acrobatic tricks. You may also see it playing possum fooling you into thinking it is dead… and kicking it off your deck to freedom.