Mature forests live out their lives and eventually die. Death can be natural or it could come from a destructive force such as a hurricane or forest fire or from an insect infestation. What follows the demise of a forest is a renewal of young growth, thickets and brush and young trees that create an entirely new and vital habitat supporting a rich diversity of wildlife.

One of our feathered friends that prefers the brush, fields and the edges of young woods is the Timberdoodle, better known as the American Woodcock (Scolopax minor – meaning “little lover of the swamps or bogs”).  Difficult to spot in nature because due to its perfect camouflage that blends with mottled colors of leaf litter, our recent migrant is seen at dawn or dusk wading through the soft soil around roadside ditches and low areas near the woods in search of his favorite food… worms.

It was no secret that I wanted to photograph our new arrival… so yesterday when my neighbor called that one was at the edge of  his woods, I grabbed my camera and ran. This little woodcock, probably an early arriving male, was seen bobbing through the leaves and soft earth at the edge of my neighbor’s woods. It took me a minute to find him but all of a sudden, there he was, frozen and still, watching us. I moved to catch a better view of this small bird. 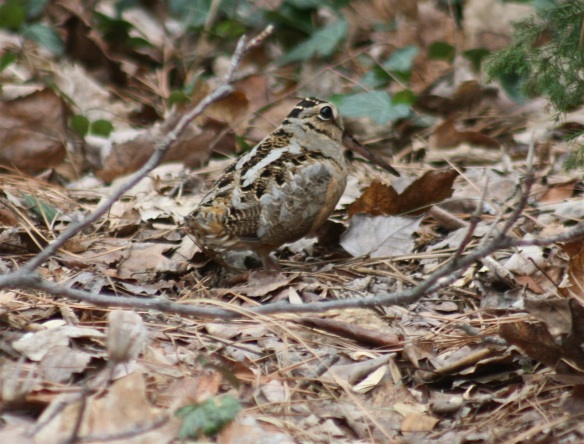 The woodcock feeds on insects by inserting its long flexible beak into the soil. It will eat a variety of insects but worms make up to 90% of its diet. Its eyes are large and high on its head with perhaps the highest visual field of any bird to observe danger from all directions. To find out more about the life cycle of this quirky little fella, including his wild mating ritual, his bobbing way of walking, and ground nests, read about him on Cornell Lab of Ornithology.

Sadly, the once high woodcock population is declining about 1.2% a year. Brushy areas needed for habitat are disappearing due to an increase of mature forests, urban development and forest fragmentation. In an attempt to boost woodcock populations, the Atlantic Coast Young Forest Initiative, a part of the Woodcock Conservation Plan, began in 2010 to create habitats for the bird from Maine to Virginia. To restore the species’ to the 1970s level, 20 million acres of young forest must be added to the current national landscape. Part of the plan calls for re-educating American landowners about how they can renew a forest to preserve biodiversity for animals that need this habitat. To learn more about ways a landowner can help, click HERE.

7 thoughts on “The Timberdoodle”