It’s Memorial Day weekend and I am enjoying the holiday in traditional ways: remembering those who lost their lives while serving in the military, enjoying cookouts with friends, beautiful weather and a lovely river view where we are watching osprey parents take turns feeding their 3 chicks just off the beach.

Beauty surrounds us on the coast of Virginia however it’s been hard to fully appreciate it when the shadow of the oil rig catastrophe in the Gulf of Mexico over a month ago looms so large. From the failed attempts to stop the leak, to the thousands of birds and other animals that are dead or dying, to the economic impact, to human illness, this domino effect disaster is beyond anyone’s imagination. The worst is yet to come.

The oil spill may not be the number one thing on everyone’s mind as it’s doesn’t affect most of us directly… right away, that is. We go about our business, then we turn on the radio or television or computer only to be jolted back into reality with coverage and images of birds and turtles and beaches and marshes coated in the black goo. It is too painful to watch or 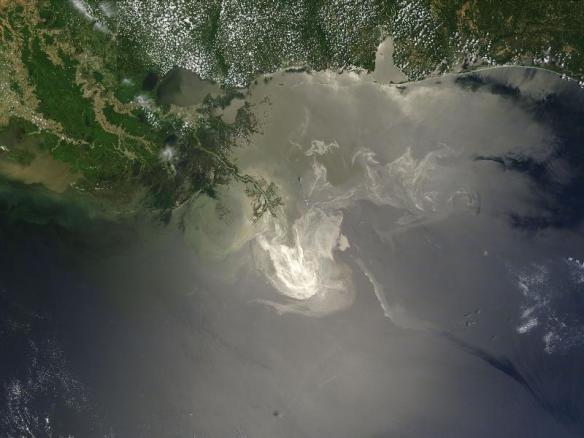 hear. We see NASA satellite images of the growing plume gushing upward from a mile below the Gulf surface. We see shocking underwater video footage of oil gushing from the sea floor. We know the damage is in the air, on the water, beneath the water, and on land.  And it is a helpless feeling.

Sadly, spills are more common around the world but thankfully rare in the US.  Stopping the worst spill in US history has ended in failure so far. Cleanup goes on. Burning the oil was ineffective, the chemical dispersants proved toxic, containment is difficult with the currents on open seas, straw proved a threat to sea turtles and officials are pleading with folks to stop sending hair as the ‘hair booms’ are said to be impractical. Last week, PBS NewsHour asked viewers to submit suggestions and more than 7,000 people responded.

Many of us who love this earth just want to help, want a solution and want to make sure it doesn’t happen again….. anywhere in the world and especially to the gorgeous coastal waters of Virginia.

9 thoughts on “From Sea to Shining Sea”