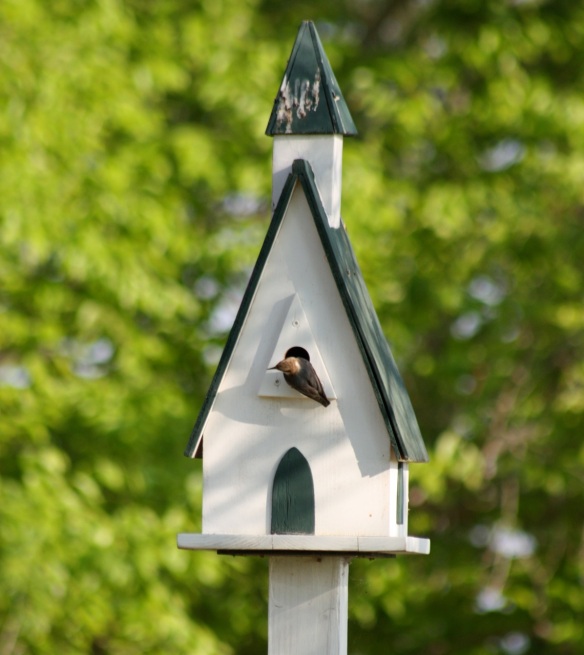 I am overjoyed about the current residents of mister gardener’s newly constructed bluebird house. A few days before their arrival, I received a forwarded article from the Northern Neck Virginia Audubon Society on a study by Dr. Mark Stanback of Davidson College in Charlotte, NC.  The United States Golf Association Wildlife Links sponsored a two-year study of the importance of pine forests density and nesting competition between bluebirds and brown-headed nuthatches.

The study focused on golf courses where bluebird boxes were distributed. Dr. Stanback found that the density of pines had little to do with nest competition between both species yet his studies found that the small nuthatches are attracted to the bluebird boxes. Bluebirds would routinely evict resident nuthatches from boxes with the standard 1.5” bluebird openings. When the openings were reduced to 1.25”, too small for bluebirds, the nuthatches in North Carolina were regular bluebird box occupants.

I’ve had year-round brown-headed nuthatches (Sitta pusilla) for the past three years and they nested somewhere in the pine forests. But just as I read about Dr. Stanback’s study, here they are going in and out of the new bluebird chapel in the azalea border.  But what’s this?  In and out were the neighborhood bluebirds, too. We needed to take immediate action. Mister gardener quickly overlaid a 1.25” opening atop the 1.5” opening. Like magic, it worked.  Mr. and Mrs. brown-headed nuthatch are nesting. The bluebirds still sit on the steeple and leave their messy calling cards but they can no longer enter the nests. UPDATE: Dr. Stanback has notified me that he is now advising 1″ openings, rather than 1.25″, to discourage sparrows. We will make a new 1″ opening as the 1.25″ can also allow titmice, the only birds we see the nuthatches chase from the area.

Dr. Stanback’s study concluded with an encouragement to golf courses in the nuthatch distribution range to make a subset of course boxes with smaller entrance holes and that 1/3 of the current bluebird boxes be provided with small holes. The brown-headed nuthatch is in decline in the Southeast.  Always thought to be caused by the loss of old grown pine, this study offers a different hypothesis: competition with the burgeoning Eastern Bluebird population is causing the decline of the brown-headed nuthatch.  Well, well, well…. 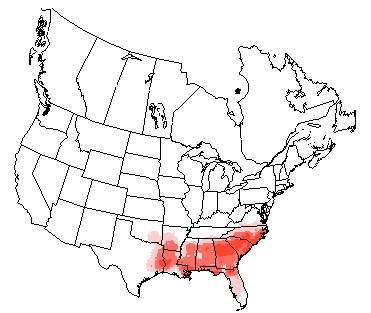 The Virginia Bluebird Society offered the following supportive statement on their website:  “Considering the availability of inch hole spacers, the current health of the bluebird population and the plight of the nuthatch, it seems reasonable to ask bluebirders in appropriate habitat in eastern Virginia to dedicate a subset of their nest boxes to this dull colored but charismatic cooperative breeder.”

Our bluebirds in Ware Neck are plentiful and bluebird boxes dot the landscape on our property and across the county. I am thrilled to learn of this latest study. The proof that it works is right in our own backyard and I encourage others who have an empty bluebird house and the brown-headed nuthatch in their yard to give this a try.  It worked for us. Thank you, Dr. Stanback!

1 thought on “Brown-Headed Nuthatches have moved in….”